Preparing For the Worst: How Hot Could it Get? 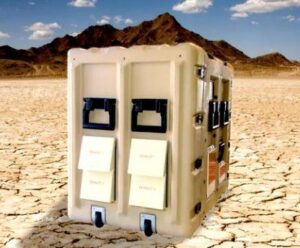 According to MIL-HDBK-310, “GLOBAL CLIMATIC DATA FOR DEVELOPING MILITARY PRODUCTS”, the highest temperature ever recorded is 58°C (136°F). This was measured in North Africa in 1922. However, in 2012, the World Meteorological Organization found flaws in the measurement method. So, the official record holder is now Furnace Creek Ranch in California with a temperature of 57°C (135°F).

Does one degree really matter?  Well, it might.  Heat is a killer for electronics. It’s kinder to plastic, aluminum and rubber from which transit cases are made. One reason to use a transit case is to protect the contents from temperature extremes. But, even the best cases have their limits. Intense solar radiation can cause warping and failure of the seal. It can also pressurize the interior, and discolor and crack the exterior finish.

You never know where a transit case will go. So, it’s essential they’re designed and built to survive in the very worst conditions. MIL-HDBK-310 handbook says, “… equipment should be designed to operate during all but a certain small percentage of the time”.  This handbook provides the base data for the MIL-STD-810 specification which addresses design and test.  Peak temperatures are derived from historical data and specified in terms of the frequency of occurrence. The 10% temperature for the hottest regions of the world (the interior of North Africa and California’s Death Valley) is 45°C (113°F). The 5% temperature is 46°C (115°F) and the 1% temperature is 49°C (120°F). Military equipment is often designed to operate at the 1% temperature any place in the world during the warmest month of the year.

But, a military case could see higher temperatures. Temperature is measured 1.5 meters above the surface, but can be 15 to 30°C (27 to 54°F) higher at ground level (where transit cases are often placed). Direct sunlight and proximity to heat sources like generators can raise temperatures still higher. Shading doesn’t cut down heat reflected from the ground and nearby objects.

Fortunately, temperatures can be lowered by wind. So, it is prudent to ensure a case gets some airflow.  Temperatures drop as the sun goes down, so the peak only lasts a couple hours.

Military standards were developed to ensure military equipment is designed for worst-case conditions. If you want to know your equipment will endure whatever nature throws at it, check to see if it meets those standards.